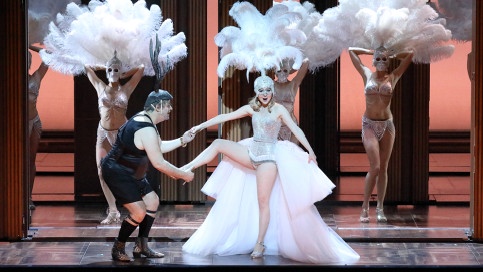 Composer Giuseppe Verdi · Libretto: Arrigo Boito after The Merry Wives of Windsor and passages from King Henry IV by William Shakespeare
In Italian with English and German surtitles

Sir John Falstaff, the enormous, immense Falstaff, as he enthusiastically calls himself, is in dire straits. His belly, his greatest pride, synonymous with his stateliness, requires constant maintenance in the form of an over-abundant supply of food and drinks. His means are therefore exhausted. Coupled with his magnificence as a real man, Falstaff’s cunning will come to his aid, he thinks: He composes identical love letters to Mrs Alice Ford and Mrs Meg Page, to captivate the ladies’ hearts and therewith also capture their husbands’ fortunes. The two “Merry Wives of Windsor” are, however, well able for the pretentious beau, as the (lyrical) comedy shifts into gear.

Verdi’s last opera was only his second excursion into the comedy genre. Almost fifty years after his early piece, Un giorno di regno, was not a roaring success, he dared approach the Shakespearean material, congenially prepared by his librettist, Arrigo Boito. Falstaff should have spirit, Verdi wrote Boito, and he therefore extended the original, Shakespeare’s The Merry Wives of Windsor, with passages from Henry IV (where Shakespeare had Sir John Falstaff appear for the first time), didn’t scrimp on the literary references and poetic artifices, and invented some of the most wonderful tirades in literary history. Verdi followed the libretto with a detailed, fully composed tour de force full of wit and depth, in which the driving grotesque is set just as unrivalled in music as the lyrical moments are.