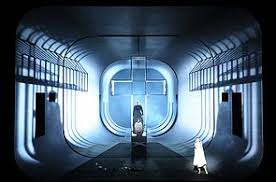 About Il Trittico:
The thriller on the Seine. The suffering, death and glorification of a mother, whose child has been taken from her. And, as a Satyr play, the confidence trick by the shiftiest legacy hunter of the Middle Ages. Three self-contained operas with seemingly unconnected narratives. But are they? Il tabarro, Suor Angelica and Gianni Schicchi – the three one-acters which Giacomo Puccini merged under the art-historical title of “The Triptych” – are snippets of reality. Instead of trying and failing to portray the world in its entirety in a long opera, similar to an epic novel, he gives prominence to three historical events, united in one piece of music, which seek to convey authentically every nuance of human emotion from ruthless coldness of heart to burning passion.